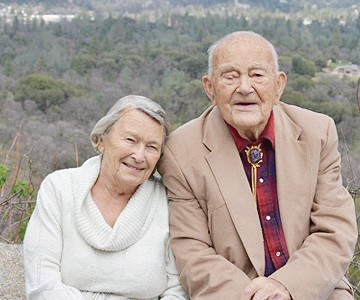 Two longtime residents of Oakhurst recently passed away within a few weeks of each other. Kitty Pokorra (Illgen) died Nov. 19, 2020. Her husband, Horst Pokorra, followed her into Heaven Jan. 5, 2021.

Kitty was born Aug. 14, 1928. Horst was born March 9, 1928. Both were born in Chemnitz, Germany, and grew up during World War II. Following the war, Horst became a British POW for a period of time. In 1948, he returned to Chemnitz, which at that time was part of the Soviet sector of a divided Germany. He smuggled Kitty back to the British sector of Germany. The two were married Sept. 25, 1948. They had two sons, Peter and Gerd.

In 1963, the family immigrated to the U.S. Horst worked in Fresno for a couple of years before the family moved to Oakhurst in 1965 where they enjoyed the foothills.

Horst had numerous jobs. The family purchased and operated two separate gas stations in Oakhurst in the 1970s, before retiring in 1977. Both were heavily involved in community activities. Horst volunteered with the Sierra Ambulance and also with the Oakhurst/Bass Lake Fire Department for many years. Both volunteered at the area’s local schools sharing about life in Germany. Horst was heavily involved in producing the high school’s first yearbook.

Among their many accomplishments, they may have been the proudest of becoming American citizens.

They became proud citizens on Flag Day, June 14, 1968. They always had a deep concern and love for our country.

Horst and Kitty were preceded in death by their parents as well as his aunt, Gertrude (Trudel), who was responsible for bringing them to the U.S.

Their celebration of life will be held later this fall.

In lieu of flowers, contributions can be made to a local charity in their name.