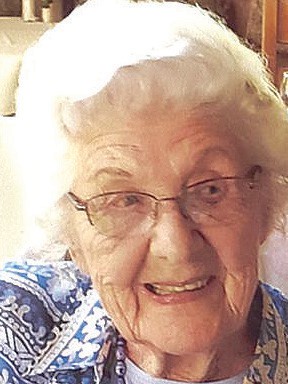 The family thanks her wonderful caregivers who enabled her to stay in her home as she wished. Elna wanted nothing more than to celebrate her 95th birthday, so her family and friends were celebrating her birthday month.

Elna was the youngest of five siblings and is survived by six nephews, three nieces and many friends in Mariposa. She will be deeply missed by all who knew her. Elna was very close to her family and lived at times with her two older sisters. She didn’t have children of her own but shared the children of her sisters.

Elna was always adventuresome. As a young woman she had a pilot’s license and flew private planes. During World War II, she applied for a job with the Women’s Auxiliary to fly bombers manufactured in Wichita to Air Force bases. During prohibition she was offered a job flying bootleg liquor but turned down that opportunity and pursued a more traditional career path.

Elna earned a bachelor’s degree in education from Wichita State University and a masters degree in elementary education from the University of Southern California. She was a kindergarten teacher for Los Angeles County for 30 years. She also spent three years teaching English for children of North American employees of Gulf Oil Company in San Tome, Venezuela. While in South America she took up golfing earning a low handicap. She dreamed of one day playing in the LPGA.

Elna married Richard Philbert in 1959 and lived in Saugus, Calif. While Elna was still teaching, she and Dick ran a feed store in Newhall, Calif. Under the name RicEl Collies, they raised and showed purebred collie dogs and enjoyed traveling the dog show circuit winning many championships.

They moved to Mariposa in 1974 where they opened Realty World D&E Realty in 1979. Elna continued to lead this firm after her husband’s death in 1988 and was named Realtor of the Year twice. She ultimately retired from real estate after 19 years, during which time she represented the business community with honesty and integrity, always presenting a professional image. She was honored by the Board of Supervisors of Mariposa County in 1998 as Business Woman of the Year.

Elna was a prominent citizen in Mariposa for many years. She was active in Soroptimist International as a member beginning in 1980 serving as president for three terms. For 24 years Elna opened her home to the public to enjoy 30-plus Christmas trees, each decorated with a unique theme, and displayed throughout her house to celebrate the holiday season.

Elna was also a long-time member of the Mariposa Master Gardeners. She was in the first class of gardeners trained in Mariposa in 2005. Elna’s garden was her pride and joy and she loved sharing it with the community, hosting the Master Gardeners’ spring garden tour several years. She also loved seeing the other beautiful gardens around Mariposa. When she retired from the Master Gardeners in 2019, she was awarded Honorary Status so she could continue enjoying the Gardeners’ activities.

Elna was a member of the John C. Fremont Hospital Foundation Board beginning in the 1980s. A proud moment for Elna was when she acted as Grand Marshall of Mariposa’s July 4th Parade.

One response to “Elna Philbert”