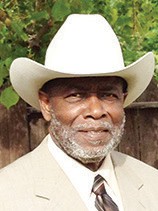 Edward came into the world on July 19, 1940, as the fourth of seven children born to Effie Jewel Kennon of Yoakum, Texas, and Elisha Campbell, Sr., in San Antonio, Texas. There were three additional children born after his parents had divorced.

Despite being the first child of his family to attend desegregated schools, Edward chose to drop out of high school in the 10th grade. Edward immediately decided to marry his high school sweetheart, Samella Dixon, in 1958. Following the birth of their oldest two children they headed to Berkeley, Calif. and later relocated to East Palo Alto.

Edward, remaining determined to provide for his young family, regretfully chose to abandon his dreams of becoming an attorney. He instead settled for immediate employment at the veterans hospital as a janitor. It had a galvanizing effect upon his quiet resolve to become successful in life.

He worked for a short time as a machinist at Beckman Instruments. Edward purchased his first home in the East Bay at the age of 19. He also managed to assume the loans of two other single family residences. It proved to become a very smart investment strategy of investing money that he earned by cleaning construction sites and working in his first business, a janitorial company that he later gave to his father.

After being turned down for a promotion several times, Edward decided to go to school at night in order to earn a real estate broker license.

He later went on to establish and control one of the largest individual African American real estate companies in the state of California.

In 1968, the Campbells moved to a home in San Jose that he purchased for his young family of four children, who survive him today, including Patrice Lenelle Campbell, Edward Earl Campbell, Jr., Dwayne Adam Campbell, Sr. and Roland Bernard, Sr.

After 14 years of marriage, Samella and Edward divorced in 1973. Edward remarried briefly, twice, remaining a bachelor until the end.

In 1984, he earned a general contractor license and later on completed his own 4,000 square foot custom ranch house. He financed and managed the construction of the commercial retail space as his third gas station and liquor store on Road 600 in Lake Madera Estates. He sold the building in recent years and it is now known as Sonny’s Market.

Among his long list of accomplishments, Edward built a 50-room hotel in Chowchilla, and built and purchased several other liquor stores and gas stations in Madera. He built a mini-storage, a U-Haul rental company, a True Value Hardware store, tack and feed store, real estate offices, Perko’s Café and an untold number of residential rentals up and down the Golden State.

In 1984, Edward increased his real estate holdings to include a 2,000 acre cattle ranch in the foothills of Eastern Madera County, which he proudly proclaimed The Lazy E Ranch.

Ranching became a relaxing pleasure that Edward experienced with his large family and host of relatives. Each summer, family tradition would include barbecue grilling, domino-playing and festivities that included horseshoe throwing with friends, family and neighbors, as well.

Edward was the true master of his own dreams, and an absolute visionary who inspired and guided countless young people into rewarding real estate and insurance sales careers.

Our entire family is comforted knowing that our father was both revered and loved.

He was proudly carried to his final resting by horse-drawn carriage after a vocalist sang his favorite standard, Frank Sinatra’s song, “My Way.”

His eldest son, Edward E. Campbell, Jr., aka Beau, and younger brother Michael C. Campbell, Sr., chose to follow in their late father’s footsteps. Beau currently operates The Lazy E Ranch under the same brand, determination and vision, currently known as The Lonesome E Cattle Company. Beau is an established land developer, licensed general contractor and licensed real estate broker. Each of the sons plans to continue to grow and diversify their portions of their father’s estate.

Edward E. Campbell, Sr. was laid to rest at Oak Hill Memorial Park in San Jose on April 27, 2021. He will be missed more than words can say.