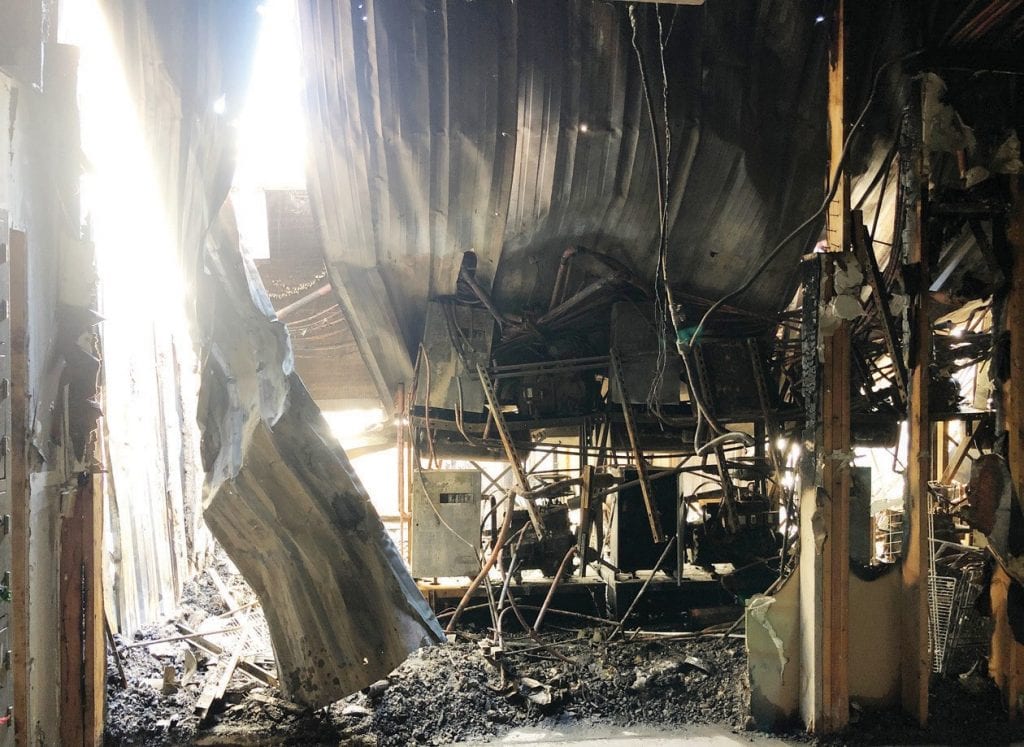 Above is the aftermath of a fire that broke out at Greeley Hill Market this past Sunday. There was heavy smoke damage and structural damage to the market, which is one of the centerpieces of the area. At left is the scene outside of the market, where many firefighters responded to the scene. Submitted photos by Jesse Figueroa

The scenario probably could not have come at a worse time.

“Saturday was one of our best days of the year,” said Jesse Figueroa.

Figueroa is the manager and part-owner of Greeley Hill Market, a business that is the heart of the community. It’s where people from Greeley Hill, Coulterville and many rural areas go to get necessary grocery items.

But now, it has been reduced to a building that was severely damaged by a fire.

It started early Sunday morning, said Figueroa, sometime around 6 a.m. “or maybe a little before.”

That’s about an hour before the store opens. Figueroa said the fire began in the compressor room and was contained in that room. He praised emergency responders for acting so quickly, saying they arrived within minutes.

But then they realized the problem.

Every electrical circuit breaker for the entire store was in that room. The electrical service for the Northside Clinic is separate. (See related story about the clinic.) 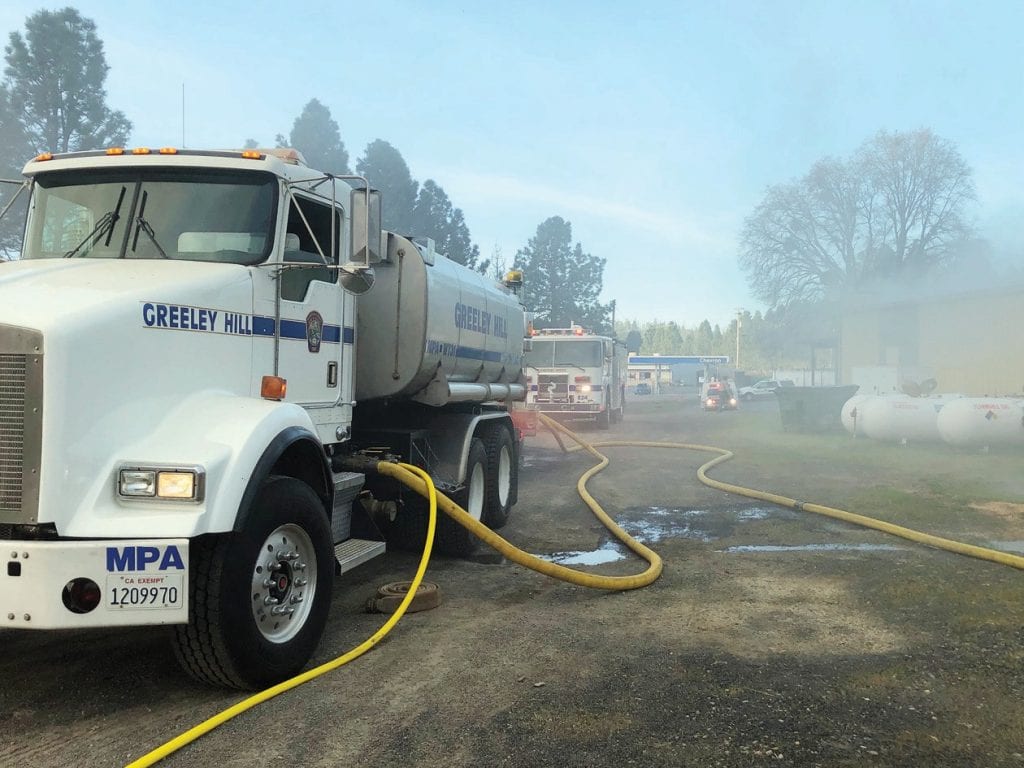 Though the fire was contained in that room for quite some time, the fire department could not spray water on the building because the power could not be disconnected .“ That was the heart of the store,” said Figueroa. “It ran everything.”

That’s when the blaze began spreading into the attic area, where it continued to burn.

Though Figueroa said from the outside, the damage doesn’t look that bad, when “you go around to the part you can’t see, it’s bad.”

So bad, in fact, the business is closed until many determinations are made. A lot of it is based on what the insurance adjusters decide. The adjusters were at the building on Monday of this week and will likely take a little time before a determination can be made. 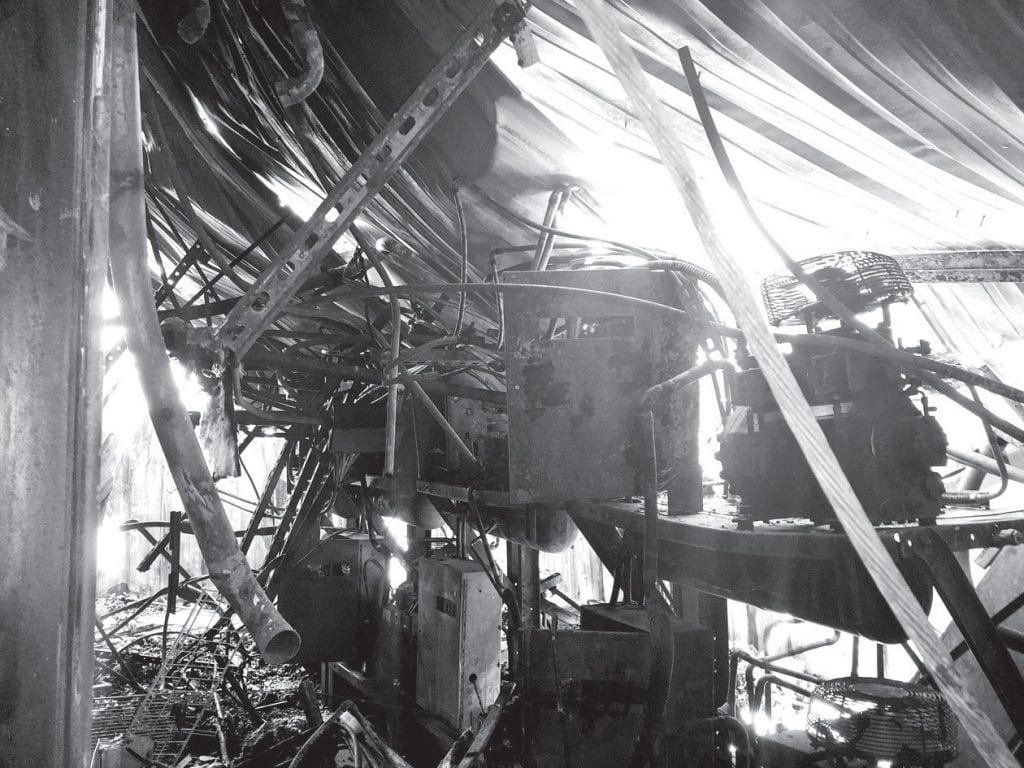 This is the mechanical room where the fire began at the market. There was heavy damage to the market and it remains closed. The Northside Clinic is also closed at this time. Submitted photos by Jesse Figueroa

As it stands, everything is turned off in the building and it remains closed. That includes the gas pumps.

“Because it got into the attic, it burned a lot of the wires,” said Figueroa.

He called it “quite the process” to figure out how and if the power can be restored.

Quinn said the “entire structure” had “heavy smoke damage and some structural damage.”

Figueroa also said it may take quite some time to get everything back in order.

“It looks like a long-term deal to get this fixed,” said Figueroa.

Besides the obvious blow to the community, there is also the matter of the employees at Greeley Hill Market.

“The employees are and have been my number one concern at this point,” said Figueroa.

He said the owners are “making sure they are paid. We are paying them now and until further notice.”

That will continue, he said, but for how long depends on what the insurance company determines.

Those determinations, too, will likely dictate how long northern Mariposa County may have to go without the market. If the building is condemned, it could mean a major rebuilding process. Even if it is not condemned, a restoration process would likely also take a long time.

That’s a blow to the entire Greeley Hill community, especially as the tourism season ramps up.

“We just made it through the rough time of the year,” said Figueroa.

He added the “big thing” about the disaster is the fact the community is left without the grocery store. He said people “have to travel a minimum of 35 minutes” to get “anything grocery-wise.”

Quinn said there were 25 fire personnel on the scene, which included 10 from Mariposa County Fire and 15 from CAL FIRE. Both agencies brought equipment to the scene, as well.

There was one silver lining in what was a historic day in Greeley Hill on Sunday.

Figueroa said much of the bulk frozen meat was still fine after the fire and still frozen inside the coolers. But with the prospect of not having any power, he said it was not going to last.

So Figueroa talked with the insurance adjuster and got the green-light to donate food to a children’s shelter in northern Mariposa County.

That included a lot of the bulk meat, cheeses and other items.

In addition, Figueroa said there were other items, like bread, that were frozen and still fine following the fire.

They donated those items to Greeley Hill Elementary School, he said.

“It is better to have it go to use rather than to throw it in the garbage can,” said Figueroa.

Mariposa County Sheriff Doug Binnewies, whose personnel were also on the scene, said they are “keeping an eye” on the community and “we’ll do whatever we can do” to help the residents.

“We will get through this,” said the sheriff.

District 2 Supervisor Merlin Jones said firefighters “got to the scene in a hurry” and he had high praise for the firefighters.

“My hats off to you guys,” said Jones.

One response to “DISASTER IN GREELEY HILL”