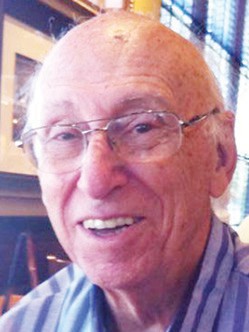 David was proceeded in death by his parents; a sister, Mary Lantz; and his first wife, Carol Conger Adamcik.

David attended St. Olaf ’s College before transferring to the University of Wyoming where he earned a bachelor’s degree in music/ keyboard (organ) and organized a boys’ choir. While in college he was part of a trampoline duo who would entertain at basketball halftimes.

He was also the understudy for the comedy ice skating team “Frick and Frack.” In 1954, David married Carol Conger in Casper, Wyo. Together, they raised four beautiful children. David received a Master of Divinity degree from the University of Northwestern Theological Seminary, St. Paul, Min., in 1958.

David’s first ministerial call was to organize a Lutheran congregation in Flagstaff, Ariz. He served congregations in Sunland/Tajunga, San Diego, Hilmar and San Bernardino. He served as interim pastor in Claremont and Chino.

David came out of retirement to serve as Associate Pastor in Hemet, Calif. His last calling was to serve the non-denominational community congregation in Wawona.

In 2003, David married Kathy McGravran Campbell and became stepfather to Aaron and Jeanie Campbell, Stephen Campbell, and Kacy and Daniel Tenneti as well as step-grandfather to six grandchildren.

Always civic minded, David was active in Kiwanis and the Mariposa Community Choir for many years. When he retired to Mariposa, he became a volunteer at the Mariposa County Library, Mariposa Museum and History Center, the Ewing Wing and Mariposa Lutheran Church.

One response to “David Adamcik”