Massive blaze destroys homes, forces evacuations and has no containment 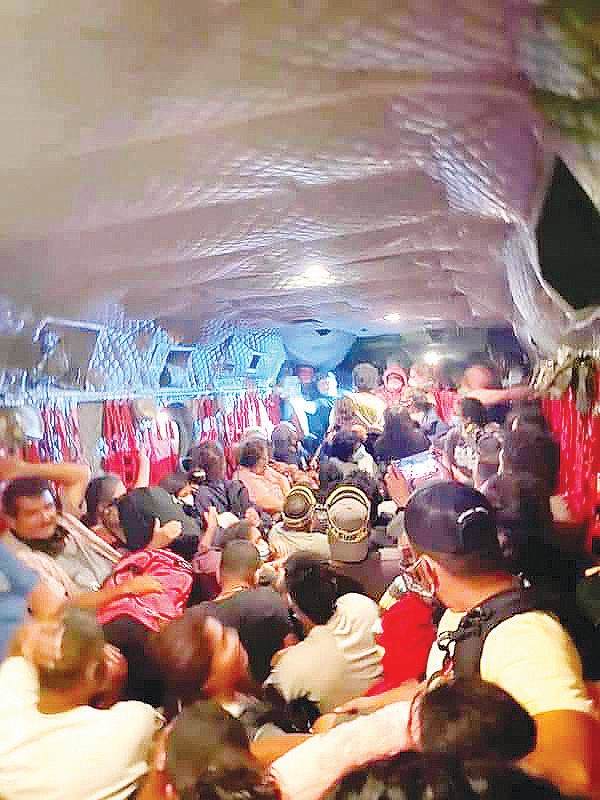 This photo from the California National Guard show people being evacuated from the Creek Fire on a Chinook helicopter. There were reports of several injuries. They were evacuated to Fresno.

Editor’s note: Because of our deadline on Tuesday afternoons, we are updating the situation with the Creek Fire as it becomes available.

Here is the latest:

By Thursday morning, the fire had grown to almost 176,000 acres with zero containment. The fire is burning in both Fresno and Madera counties, with Mariposa County areas around Fish Camp also under advisements for possible evacuation should the fire continue in that direction.

According to the unified command center, there have been 361 structure destroyed in the blaze with another 14,000 threatened. Officials said winds were expected to ease on Thursday and temperatures were expected to return to a more seasonal average.

Damage inspection work will continue, according to officials, who also said the fire activity remains “active and intense in heavy fuels.”

Smoke, too, remains an issue throughout the region and residents are encouraged to limit outside activity as much as possible. People should also monitor the latest conditions because further evacuation orders are possible.

As of Thursday morning, there were 1,336 personnel fighting the blaze, including 142 engines, nine helicopters and 60 bulldozers.

The Creek Fire came like an unwelcome guest at a Labor Day barbecue and, suddenly, no one was talking about covid anymore. By the end of the holiday weekend, officials called the fire an “unprecedented disaster.”

A combination of low humidity, high temperatures, dead trees and moisture sucking winds drove the flames through more than 143,000 acres in three counties as of Tuesday morning, leaving people stranded and structures burned while responders worked “feverishly” to control the uncontained blaze.

The wildland fire started near Huntington Lake in Fresno County on Friday, Sept. 4 around 6:30 p.m. and by Saturday afternoon, the Creek Fire had moved into Madera County, prompting evacuations and leaving more than 100 people desperately waiting for airship rescue near the water at Mammoth Pool Reservoir.

The California National Guard flew repeated missions, ferrying people — some of whom were reportedly injured — out of harm’s way. 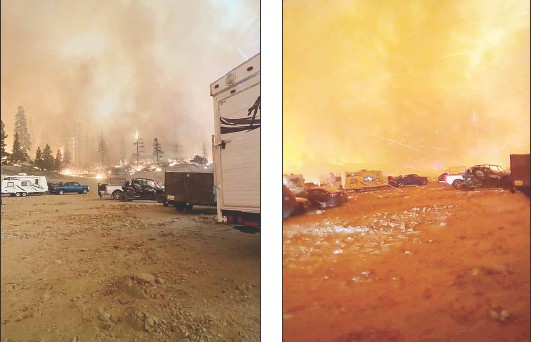 This was scene in the Sierra National Forest when several campers became surrounded by flames in the Creek Fire last weekend. These photos by Cameron Colombero were taken at Mammoth Pool, where many people were rescued by helicopter. Submitted photos

“We are still in a massive firefight,” said one CAL FIRE official Monday evening.

Resources have been spent on life safety and protecting infrastructure, while winds and smoke hampered air support even as crews on the ground worked in treacherous, brush-choked terrain with temperatures well over 100 degrees.

The Creek Fire, Gould said, is the “most aggressive,” and “in a class by itself.”

Evacuation warnings and orders came fast and furious on Sunday and Monday for communities including from Wawona and Fish Camp to Bass Lake, North Fork and Coarsegold, as the Creek Fire continued to burn on both sides of the San Joaquin River near Mammoth Pool, Shaver Lake, Big Creek and Huntington Lake.

“The fire hit incredibly hard,” said Gould, adding that forest service personnel had been personally affected by structure loss, making the fight “harder and more emotional” than ever.

In Madera County, shelters were opened for people and animals in North Fork, Oakhurst and Coarsegold, while some area schools were canceled for the week as hundreds of residents left their homes under evacuation orders or were poised to flee with a warning.

Sunday night, at the urging of Madera County Sheriff Tyson Pogue and others, California Gov. Gavin Newsom declared a state of emergency in Fresno, Madera and Mariposa counties due to the fire, helping the state to deploy additional resources.

On Monday, the fire continued to grow in all directions under extreme conditions including high heat and a red flag warning for fire danger. Later in the day, a chopper flew overhead in Bass Lake and North Fork, using a bullhorn to warn residents to evacuate.

At a press conference on Monday night, officials urged residents to heed evacuation warnings and orders, saying most warnings turn into orders, anyway.

As of Tuesday morning, the Creek Fire had torn through 143,929 acres with 0 percent containment. Some 1,060 personnel were on duty, many for over 72 hours, with units from Sierra National Forest, CAL FIRE units Fresno-Kings and Madera-Mariposa Merced and other agencies.

On Tuesday morning, rescue attempts continued at places including Edison Lake and China Peak in Fresno County, locations referred to as “temporary safe refuge” where about 60 campers and hikers had gathered to avoid the fire.

As of 6 a.m. on Tuesday, with Mono winds expected, the incident command was organized into two divisions.

“There are going to be two Type 1 teams on a single incident,” Gould said. “That’s not unprecedented but it’s not common.”

A Type 1 Incident Management Team (IMT) is typically a federally or state-certified team known as the most experienced and highly trained IMT, and are deployed in fire and other national disasters.

Incident Commander Marty Adell said residents may be evacuated for “a long time,” adding that the “protection of property is very important.”

The official containment date for the Creek Fire is Oct. 15, according to the USFS, though that is generally just an estimate.

Briefings will continue every evening for the next few days, at least, forest officials said.

In California, more than two million acres have burned already this fire season.

Gould assured those at the press conference that both the federal and state governments are “talking seriously” and the fire “has the attention of those who can help to make a difference.”

“You would be incredibly proud,” Gould added, “to know what folks are doing on your behalf.”

To get the latest information about the Creek Fire visit inciweb.nwcg.gov/incident/ 7147/.