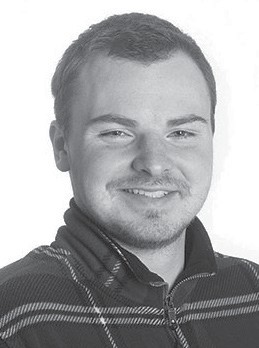 I drank my first cup of black coffee the first day I worked at this newspaper.

An empty white mug sat among the notepads, pens and other introductory office supplies the Littles had left waiting for me in my new office. Greg mentioned he had a pot on the warmer after ushering me in. I thought to myself, “Why not?”

It’s going to sound laughably dramatic. But in some ways, that cup of coffee, and the cup that came at about the same time the next day, and the day after that — they became the basis for a rethinking of my life.

My previous reporting job offered little schedule stability. Because of that, I hadn’t really had a consistent routine for about four years before coming to Mariposa. I’d convinced myself that life was better that way. That unstructured — and at times chaotic — was the kind of lifestyle a young writer should crave.

But man, I love drinking a cup of coffee every morning.

Mindful daily rituals have been noticeably absent from my life in recent years. As I reintroduce them, I’m reminded that their consistency is powerful. I’m also learning they can show us more about ourselves than we’d expect.

Early morning workouts give me a sense of accomplishment before sunrise. That cup of coffee at work energizes my mind and tells my brain it’s time to do what my heart loves. Evening strolls outside allow me to unwind and reflect on my life away from the Gazette.

Four months ago, I could have never envisioned a fulfilling life that relied on such repetition. I still considered daily regimens to be too procedural and too boring when I came to the foothills in November.

While reporting in Indiana, I’d usually show up to my office sometime in the morning and work in punctuated bursts until long after sundown. Going with the flow was exciting and adventurous. It was also exhausting and stressful.

I took care of myself, but I spent most of my time thinking about my work. My life was built around writing feature stories during the day and covering government meetings at night. My free time was spent napping and watching TV.

On the surface, the grind of working at a daily newspaper brought big workloads and many canceled plans. Underneath, though, the inconsistency manifested in recurrent lapses in creativity as well as strained friendships and relationships.

When I’d actually get a chance to catch my breath, I’d wonder.

What could my life be like if I had more control?

Most journalists find the answer to that question sooner or later. “Burnout” is an unfortunately popular word in our craft. It’s what happens when a writer or photographer is pressed beyond their limit and loses their drive to tell stories. Neither talent nor tenure protects from the affliction.

I’ve yet to burn out.

I have, however, felt my flame flicker throughout my career.

My new routine is helping to keep it constant.

Newspeople often boast that their jobs aren’t 9 to 5 gigs. And while it is true that my role at the Gazette isn’t strictly bound to those times, on most weekdays, they are the hours I spend interviewing, writing and piecing together my stories.

I’m incredibly grateful for it.

I’ve found comfort in the control that my routine provides. Happiness in the ways I can now choose to fill my days. Direction in the quiet moments that are still new to me.

Aimless nighttime social media scrolling has been replaced with phone calls to friends.

Instead of hurriedly scarfing down lunch between assignments, I make time to slow down and eat with my colleagues.

On-the-clock distractions have been cut back so I can end each shift by reflecting on the day — and establishing my goals for the next one.

I don’t feel like I’m going with the flow any more. Instead, I feel like I’m generating my own current for the very first time. It’s exciting and adventurous — and, interestingly enough, not very exhausting or stressful.

Of course, these daily rituals don’t always go to plan. Sometimes the cycle breaks. Interviews can run long. I will occasionally oversleep. And some stories just cannot be told between traditional operating hours.

But for now, it mostly works.

I think it’s changing me.

And it all started with a cup of coffee.

Allen Laman is a staff writer for the Mariposa Gazette and can be reached at allen@mariposagazette.com.