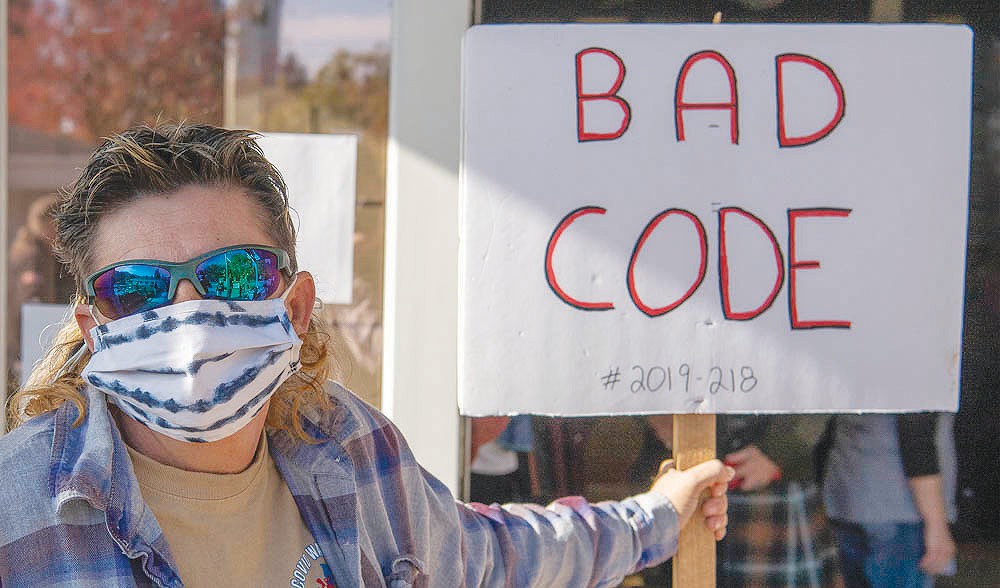 Longtime Coulterville resident Magnum Lee Godfrey is shown outside the board of supervisors chambers last week holding this sign in protest of proposed code compliance regulations. Godfrey is also an EMT. Photo by Al Golub

The people spoke and the elected officials listened.

That’s what came out of a meeting held last week by the Mariposa County Board of Supervisors which focused on code enforcement in the county.

The meeting came on the heels of a similar meeting three weeks ago in which the board took the first steps in implementing new code enforcement rules. During that meeting, the board voted 4-1 to proceed with the first reading of the amendments to the code rules. Supervisor Miles Menetrey was the only dissenting vote.

But following that meeting, a groundswell of outrage swirled among many citizens, who said they felt there was a lack of public input on the important discussion.

Following that meeting, Mariposa County Planning Department Director Sarah Williams informed the board she would be coming back to the members with various suggestions about how to proceed.

She did that last week. 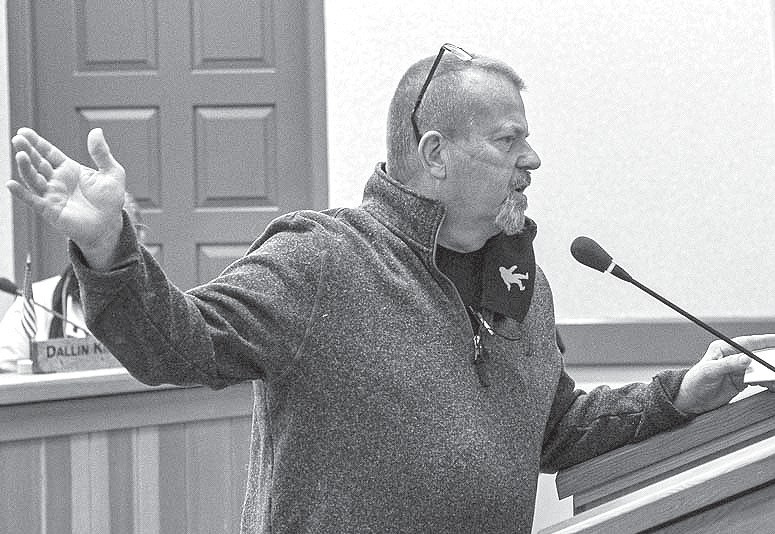 Shannon Poe of Greeley Hill makes a point to the board of supervisors during last week’s meeting about code compliance. Photo by Al Golub

Because of the “significant public opposition,” Williams presented four alternatives to the board as a path forward.

The first was to “stay the course,” as Williams put it and to adopt the each of the four ordinances the board had approved previously.

The second was to approve the ordinances and then form a citizens review committee about how to implement the program.

The third option was “drop the project” entirely, said Williams.

Option four focused on establishing a compliance mechanism for marijuana cultivations which exceed the current thresholds. Illegal marijuana grows have been one of the biggest issues discussed. Many local citizens have said they are afraid to come forward because the growers may retaliate. They also complain about the negative environmental impacts of illegal grows as well as the danger of fire.

Supervisor Rosemarie Smallcombe asked Williams about the fourth option and whether it would be stand-alone in code chapters or part of the overall changes being proposed.

Williams said the original code was written for medical marijuana but state laws have changed since that time and the process would likely be to incorporate those changes into the code.

One of the main reasons county officials have sought to make changes to code compliance is because they say, as the current codes are written, it is difficult to enforce the laws. Officials have said the ultimate step is going to court, which is time consuming and costly.

Williams said the county is successful only about 45 percent of the time when it comes to code enforcement. That means more than half of those who are issued violations actually don’t end up complying with the law.

Menetrey also said he has listened to the public, who overwhelmingly have objected to the way the situation has been handled.

“It makes a statement,” said Menetrey.

He also pointed out since two of the supervisors are leaving their office in January, it would mean “handing this to the next board. Time is short for the current board.”

“There are a number of people who have said, ‘Hey, board, slow down. We haven’t had enough time to look at it.’ Those people asked for an opportunity to work with the county to suggest amended text and an amended procedure. That’s why option two is there. There is no way it could be done before the end of the calendar year,” said Williams.

“I know, I have heard your voices and have changed direction,” said Long. “I came to the conclusion we need more public input.”

Supervisor Merlin Jones said he agreed, saying, “I’ve thought about this a lot.” He also said he has received “a gillion emails and phone calls” about the matter.

Jones said he has a neighbor who has six non-permitted structures yet nothing gets done.

He spoke of the “people who are out there doing it the right way feel like they are being penalized.”

Jones also chastised people who threaten or talk down to county staff who are charged with code enforcement and other responsibilities, like planning and building.

“When people refer to them in may different ways that are inappropriate, I take offense to that,” said Jones. “They are great people.”

But he added he was in the camp of slowing it down.

“I think a pause to this is appropriate,” said Jones.

Board chairman Kevin Cann said it was “clear we lost control of the initial desire to implement compliance actions between saying, ‘Shame on you’ and going to court for receivership.”

Cann said there “has to be some compliance action” that can be taken “to do the minimum necessary to bring everything from zoning to safety issues in line.”

He, too, supported a pause in the proceedings, saying it should be a “much more public process. … so the result is something folks can support and get behind. I take a responsibility on the county’s side. We should have been out with that communication three months in advance.”

After the supervisors first spoke, Cann said he thought it was clear a majority of the board wanted to hit pause and would be willing to vote against the proposed amendments which were on the table. Because they were approved three weeks ago, action had to be taken.

But before those votes were taken, Cann opened the floor to public comments.

And there were many comments from the crowded board chambers which overflowed into the hallway and even outside because of social distancing requirements.

One of the first people to speak was Shannon Poe, a resident of Northern Mariposa County who once pondered a run for supervisor.

“I researched very specifically what the roles are each of you play,” said Poe. “The primary one is to listen to your constituents and represent them.”

Poe said he had “never seen unity from the broad scale of the spectrum like I see here today.”

He recommended choosing option three, which would end the entire process.

“We need to fix the current code,” said Poe. “That’s what we pay you guys for.”

Poe referenced some work he had to do and that he did get the required permits, but felt what Jones said meant he really didn’t have to do that because there would be no consequences.

“From what I am hearing from you, Merlin, I could have just given you the middle finger,” said Poe. “I would hope that you folks here today see what’s going on here. Everybody opposes this. Get rid of this thing. It’s horrendous. I’m not sure what it is going to take to convince you of this.”

“I felt at times your vision for the county was not shared by the community,” she said.

She spoke of one incident in which Trujillo said the county code enforcement officer came to the property.

Her husband, Anthony Trujillo, a church pastor, said adopting the proposed code enforcement rules would do more harm that good. He said “giving teeth to the law is like giving more teeth to a great white shark.”

Local resident Ken Melton said enforcing code “does not take a court. Your enforcement procedure is a big issue.”

Melton suggested having workshops with the public as well as local builders and contractors would be a good first step.

Resident Jame Burgess also addressed the board and brought up the Jerry Cox case. In that case, Cox was found in violation of 101 building codes and his property was eventually placed into receivership and sold. (The case remains in the courts.)

“Jerry Cox was my neighbor and I’ve watched him go through this whole thing,” said Burgess. “You took his land and sold his property. You have the same law firm working for you that worked on that.”

Burgess was referring to the firm Silver & Wright, which the county retained in the Cox case. That same firm has consulted with county officials about the proposed code changes.

“I’m not a Jerry Cox fan; never have been,” said Burgess. “But you guys treated him like he wasn’t even an American citizen. Whoever put this on the board should resign because if you don’t, we’re going to impeach you. We will recall you because you don’t have enough common sense.”

Resident Nick Lambert suggested the board take another step, calling it 3.2. He said they should drop the project and then form a citizens committee to work with county officials on developing proper code.

Elijah Butler told the board it “feels like we are not looking out for one another here.”

He called it a “push to gentrification. Only the rich can afford these types of things.”

Barbara Armstrong said the process has “been a really learning experience for me. I would not have gotten involved as I have with Covid and a time of political unrest if I didn’t believe what we are doing is right.”

She did say the board got the attention of the public.

“You have united everybody in this room,” said Armstrong. “That is an achievement. Roll with that. Work with us and don’t disenfranchise the most vulnerable in this community.”

After public comment, the matter came back to the board members for discussion.

“Option three completely denies this project and really denies the voices of the folks who has issues with a neighbor,” said Menetrey. “The complaints that we get that just a letter is sent is not helping the folks on the other end of this.”

Menetrey said he thinks the input of the public should be “tied into the process in creating something we can all agree upon. We need to have enforcement.”

Supervisor Rosemarie Smallcombe said she believed there was a large segment of the population who was not represented and that is the people who are frustrated with the lack of code enforcement and how it impacts property values, creates hazards and more.

She pointed to the former Muir Lodge in Midpines, which is in a state of disrepair.

She also talked about renters who live in substandard housing yet the county has no teeth in its code to force landlords to make repairs.

“They have no recourse. We don’t have a lot of housing. They are a part of our community just as much as you folks are. Who speaks for these folks?”

Smallcombe also said the proposals are “not for revenue. We don’t want to acquire anybody’s property. That is the last thing we want to do.”

Cann said the county “can never eliminate code. That is a dereliction of duty.

“This input I think helps everybody,” said Jones.

Jones also spoke to those who said they wanted to recall supervisors.

“I won’t be here,” said Jones, who will be leaving office at the end of the year. “If someone wants to recall me, go ahead and recall me.”

In the end, the board chose to hit the pause button and have county staff come back with a few alternatives in the next year, when there are new board members.

They also chose to continue to pursue the changes to the marijuana enforcement rules during that same time on the recommendation of Williams, who said it will be a parallel process.

No vote was taken on that issue as it was direction to staff. On the four amendments in question, all were voted down 5-0.