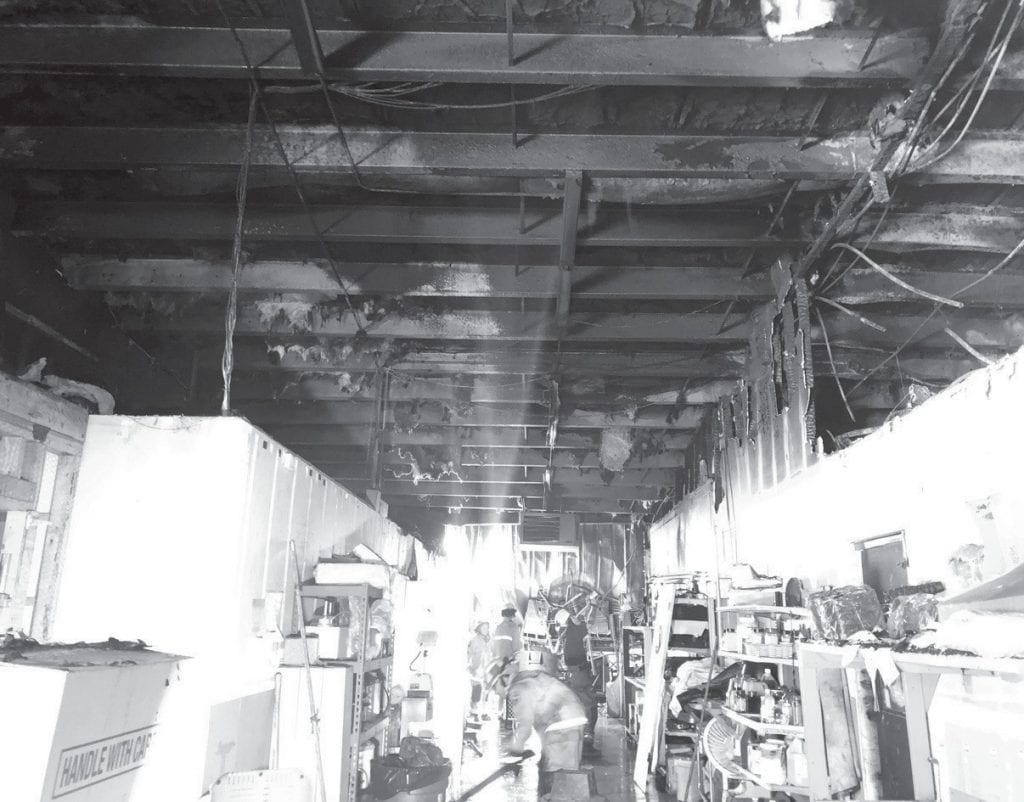 Firefighters are shown inside the Greeley Hill Market following the fire this past weekend. Damage is visible to the attic area of the building as well as other parts of the structure. Officials are waiting on insurance and state inspectors to determine the future of the market.

When fire broke out at the Greeley Hill Market last Sunday, it also had a major impact on medical services in northern Mariposa County.

“The district is in this for the long game,” said Matthew Matthiessen, CEO of the John C. Fremont Healthcare District.

The Northside Clinic, which has been in operation since 2007, is part of the market building. Although there was minor damage to the clinic portion of the building, that doesn’t mean there aren’t major issues.

In fact, because of the extensive damage to the market building, officials still don’t know if that building can even be salvaged. They are waiting on information from both insurance officials and state fire inspectors to see what will happen. (See related story.)

What that means is the Northside Clinic is closed, at least for the time being.

“We’re in this for the long game,” said Matthiessen. “We are committed to continuing clinic services in northern Mariposa County. We will resume as quickly as possible.”

But how long that will be remains the big unknown.

Terry Woodward, plant operations manager for the district, was at the site on Sunday when the fire happened. He said there is “minimal water damage” in the clinic and some limited smoke damage.

“It’s going to depend on the inspectors,” said Woodward.

Woodward said a firewall between the two businesses did its job and no flames reached the clinic. The water to the clinic is provided by a well and the electrical system for the well was damaged, though that could be remedied, he said.

In the meantime, Matthiessen said officials are figuring out ways to continue to provide services to the people in the Greeley Hill and Coulterville areas.

As of Tuesday morning, they have been providing gas cards to patients so they can travel to Mariposa to get necessary medical care.

But, he said “not everybody” has the means to travel to Mariposa, even if given a gas card.

Cindy McAfee, director of clinical operations, said the Northside Clinic has eight to 10 patients a day and it also provides lab services twice a week. Fry sees all of those patients.

Another major issue, said McAfee, is prescriptions for patients.

“It is a huge component,” she said.

With electronic medical records, she said some prescriptions can be refilled over the phone, but others have to be from a medical professional. They are working to make sure that happens.

“We needed to get our bearings,” said McAfee, adding they spent the bulk of Monday trying to get a system in place.

“We want continuity of care,” said McAfee. “We are totally committed in that area.”

She stressed that has to be “with proper oversight.”

One of the biggest obstacles which officials are facing is getting the proper state and federal approvals once a decision is made about the location of the clinic.

Nanette Wardle, emergency preparedness coordinator, said no matter where the clinic is housed, there will still have to be approvals from state and federal agencies.

Wardle said that would be the case even if they are given the green-light to go back into the current location. Because there has been an issue involving the fire, she said those approvals would be required.

In addition, should the clinic not be able to go back into that building, they would have to find another location. That could be either a permanent building or possibly a mobile clinic.

Wardle said with either of those options, there still has to be state and federal approval.

“This is not going to be overnight,” said Woodward.

McAfee said hospital officials might be appealing to the state to take a hard look at the situation in Greeley Hill. Though it’s not a emergency, at least in the state’s eyes, she said it is a dire situation for the people of northern Mariposa County.

“We would like the state to look at it because there are no medical services there,” said McAfee.

“They’re worried,” said McAfee about the patients who they have talked to since the fire.

“It’s not going to be fast,” said Matthiessen about finding a solution.

However, he said officials will continue to work every angle in an effort to get medical services back to the north county as quickly as possible.

“We have to find a solution to get us (at the level where we are now,” he said.

One issue McAfee said is important is patients can still call the number for Northside Clinic and the calls are automatically routed to the office of Fremont Family Physicians, where Fry is currently working in the interim. That number is (209) 878-0155.

She said scheduling, questions about medications and general information is available by calling that number.

Matthiessen said JCF officials will begin working with officials from Mariposa County to see if they can join forces in finding solutions for the medical situation in northern Mariposa County.