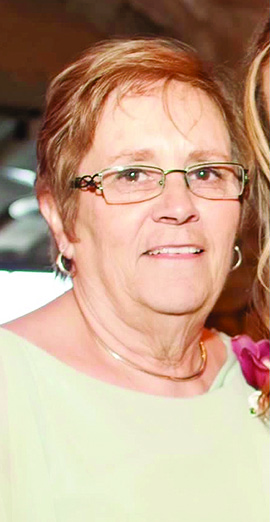 Christy Mathis, a hard-nosed and hard-driving nurse-turned-rancher’s wife whose tough exterior belied the kind heart and graciousness that lay beneath, died suddenly at her home. She was 78.

A mother of three and doting grandmother of five, Christy had an indefatigable work ethic. For many years, while managing the Mathis household and the family cattle business finances, she was a Girl Scout leader and active in 4-H. Christy also took great satisfaction from her involvement in the Hornitos Patrons Club, the Catheys Valley Garden Club and California Cattlewomen.

At home, she churned out intricate personalized quilts for family members and friends, tended to her gardens and hosted and cooked dinners for her wide circle of friends.

“Everything Christy did, she did so well,” younger sister Judy Thibodeau said. “She’d make all these quilts and they would look like a professional production. She did everything with precision.”

For most of the last decade, Christy cared for husband Lewie, providing dialysis treatments at their home on a nightly basis. She continued even as she faced her own health challenges, only recently allowing caregivers to provide the demanding care.

“She was the rock. The glue that held this family together,” daughter Stephanie Hibbits said.

Christy passed away, gently, on May 1, while resting in a recliner in her living room on the family’s sprawling cattle ranch on the outskirts of Lompoc, in Santa Barbara County.

Christyn Marie Errecarte was born Aug. 10, 1942, in Southern California, the oldest of Joaquin and Emma Errecarte’s three children. Judy was born 18 months later and brother Jim arrived about four years after that. The family lived modestly in what was then the small beach town of San Juan Capistrano. Emma stayed home with the kids while Joaquin — known to all by his nickname “Queen” — ran a gas station, then became a carpenter and ended up the foreman of Rancho Mission Viejo. After work, he would labor in the family’s orange grove.

After high school Christy earned a nursing degree and worked as a registered nurse until marrying Lewie Mathis. They had met a few years earlier when she attended a post-branding barbecue at Rancho Mission Viejo.

Christy was very proud of her time as a nurse. Despite never returning to the profession, she continued to take continuing education classes to maintain her license for over 30 years.

Christy was outgoing and provided a good balance to Lewie’s cowboy stoicism.

Lewie and Christy married Sept. 10, 1964. They had three children — Todd, Jeff and Stephanie. Todd and Jeff followed their father into cattle ranching while Stephanie became an equine veterinarian.

As kids, the Mathis siblings were active in sports and other avocations. Christy got them wherever they needed to be.

“She spent a lot of time driving us all over the place,” Stephanie said.

Holidays were special. Christy made Halloween costumes for her children and baked pies and cooked an immense dinner for Thanksgiving. Christmas was a monthlong celebration, with Christy baking and putting up decorations throughout the home. The family always had a very tall Christmas tree thickly covered in lights and ornaments.

Stephanie said her mother loved to travel but ranch life didn’t allow her to do it as often as she would have liked. Still, there was a memorable mother daughter trip to England and France where Christy served as a chaperone for a group of students. They also traveled together to Washington, D.C., and New York City.

“She sacrificed a lot to give us a good childhood,” Stephanie said, recalling how her high school and college friends were always made welcome by Christy when they visited.

“She was a favorite of my friends because she was sort of sarcastic and funny but also a really good host,” Stephanie said.

Christy took pleasure in helping her family and those outside it. Stephanie remembered that when she completed her surgery residency, her mother — without being asked — made equine-themed quilts for two of her mentors, as well as a third one for Stephanie to keep.

That thoughtfulness continued until the end.

The day after Christy’s death, her daughter-in-law, Stephanie Mathis, started sorting mail that had piled up. She found letters from the California Department of Agriculture’s division of brand registration.

Inside was confirmation that two longtime family brands had been transferred to Stephanie and Jeff’s sons, Lewie and Zane.

Transferring brands is a complicated process involving letter-writing and dealing with bureaucrats. Christy had vowed to make sure her grandsons grew up with those brands officially attached to them and spent months cajoling the government.

Her sons, greatly saddened by their grandmother’s death, immediately brightened when told the news. “She could not have left a bigger spark for them to become cattlemen,” Stephanie Mathis said.

A private memorial gathering will be planned for a later date.

One response to “Christy Mathis”