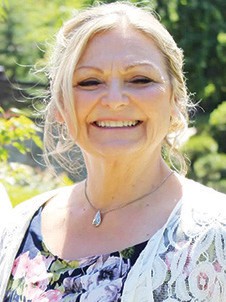 On Tuesday, April 20, 2021, Cheryl Ann (Haas) Ferguson, loving wife, mother of two sons and grandmother to Mason and Abigail, passed away at age 62.

Cheryl was a member of the Clovis Seventh-Day Adventist Church. Her passion was to become the ultimate grandmother, as her home and backyard displayed the daily accumulation of projects she and Mason created together, most notable being a hand-drawn representation of the solar system, including dwarf planets, which was hung across her living room ceiling.

Cheryl was known for supporting the many activities of her sons, such as the Clovis High School wrestling and football teams. She played fast pitch softball nearly 30 years in the Clovis league.

Her hobbies were flower arranging and gardening in her backyard, which she designed for a place to enjoy time with family.

Cheryl was preceded in death by her father, Rodney.

She is survived by her mother, Verna; husband Rick; son, Scott and his wife Amanda; son, Brett, and his wife, Shayna, and their children Mason and Abigail; sister, Carri Link; brother, Cory Haas; and brother, Casey Haas.

A funeral service will be held on Thursday, April 29, at 10 a.m. at the Clovis Seventh-Day Adventist Church, 2370 Helm Ave., Clovis. A reception will follow.