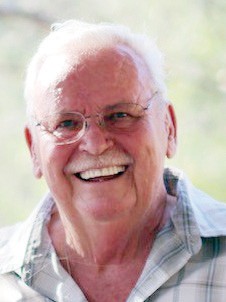 Carl Moller Johnson, born in 1939, has made his way to heaven after a long battle with pancreatic cancer.

Carl’s parents immigrated to America from Denmark and became proud citizens. Carl always had his Danish pride on show.

His smile and laughter were contagious; he was the perfect host and one never left his house hungry.

A full-time retired Mariposa resident of 25- plus years, he enjoyed working and relaxing at his “Golden View” paradise.

He was Lutheran since birth and an active member of the Oakhurst Lutheran Church. Carl spent his time volunteering at the local museum, sharing with visiting children how to pan for gold and yelling “Eureka!” when they found some “color” in their pans.

He leaves behind Susan, his loving wife of 57 years; son, Eric; daughter, Karen and husband Ken; and loving granddaughters Michelle, Alyssa and Grace. He especially enjoyed spending time with his crazy neighbors Mark and Neale, and all their dogs.

Carl was proud of his nickname “PITA” (Pain in the …) given to him by his granddaughters.

If you knew Carl, he had probably given you a hard time and played a practical joke or three on you.

Laughter was his biggest gift and he made sure all enjoyed the joke.

At Christmas time he would dress up as St. Nicholas and hit the road to make people smile, handing out candy canes to all.

There will be a happy celebration of life in his memory at the Oakhurst Lutheran Church at 11:03 a.m. (sharp) on Saturday, Aug. 10.

The family asks no flowers be sent because Carl always said, “You give those to people living so they can enjoy them!”

Anyone who would like to donate in his memory may give to the Oakhurst Lutheran Church or the Mariposa Museum and History Center.