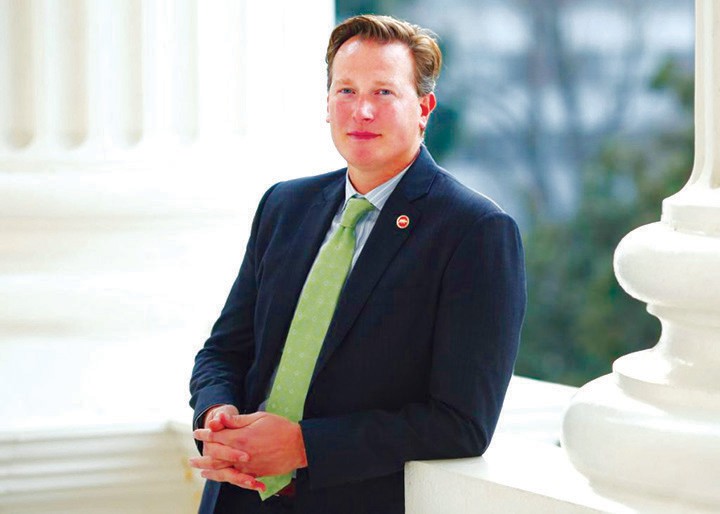 California Sen. Andreas Borgeas has a lot on his plate.

That not only means a lot of territory, but it also means a lot of issues for the Republican, who faces uphill climbs in Sacramento which is dominated by Democrats in both chambers of the legislature.

With a pandemic raging and the state’s largest single wildfire in history still burning in his district, Borgeas said all of it has to be dealt with — no matter party affiliation.

“In the mountain communities, obviously wildfires were second only to Covid in national interests,” said Borgeas.

Wildfires, he said, are growing each year and it is costing time, money and lives.

“This was a spectacular tragedy both in terms of some human loss, a lot of property loss and extraordinary change in lifestyle and insecurity for those who live in these beautiful mountain communities.”

Borgeas said he “made a number of trips” to the Creek Fire area, which began in Fresno County and quickly moved into Eastern Madera County, both places he represents.

During one of the visits, Borgeas said he was “most impressed” with the “vertical integration of first responders.”

He said there were first responders from around the world, like Mexican firefighters, who were working with the locals, like Clovis Police Department officers, Madera County officers and more.

Several weeks into the fire, Borgeas said the Federal Emergency Management Agency (FEMA) denied a request from the state to receive emergency aid because of the fires.

During one point, Borgeas said he was on the phone with top officials from the White House imploring them reverse course on the aid. With him was the CAL FIRE chief along with other first responders.

“Rather than serve as an intermediary, I put it on speaker phone and had people talk to the White House and what they wanted,” said Borgeas. “It was symbolic of a hands-on approach.”

He called the fact FEMA denied the funding “unacceptable” and drafted a letter requesting the president “override and allow for a federal declaration. It was absolutely fantastic when the president reversed course.”

Though he is unsure exactly what happened, Borgeas has a theory.

“Perhaps FEMA was looking at the financial capacity of the state and made a determination under an extraordinary situation that California, if left to fend for itself, it might survive,” he said. “The president rightfully put politics aside that this was a national problem.”

But politics always seen to creep into just about any issue, and Borgeas said that was the case, in his opinion, when Gov. Gavin Newsom and now Vice President-Elect Kamala Harris “paid a visit to the area and said something I thought was a bit insensitive and highly inaccurate.”

That, he said, was when the governor and Harris “sat in front of timber burning and said this is what climate change is all about.”

As an educator, Borgeas said he “values science. I took those (comments) to be inaccurate. I believe the governor is confusing cause and consequences.”

Borgeas said he understands “climate change is real but there is a difference between poor forest management. It turned to a tragic level.”

Borgeas said over several decades, there has been “no forest management.”

That, he said, is one of the root causes of why wildfires have grown in size and intensity over the past few years.

By not having proper management, he said emergency responders have difficult access to areas and there has been a lack of “hardening communities” against wildfires.

“All of those would have made it far less damaging,” said Borgeas.

Another issue which Borgeas is passionate about is how to change what he sees as over regulation by Sacramento.

“When I was a county supervisor, I wore a hat that allowed me to understand these issues in one way,” he said. “When at the state, I began to see the power of certain groups.”

One of the biggest ones, he says, are environmental groups.

“The environmental lobby in California is very powerful,” said Borgeas.

He said “appointees by the governor” are put into positions of power and then wield it when it comes to environmental rules and laws.

“What I have seen first-hand is you create a vast network of individuals who are ordinarily predisposed on an environmental position,” he said. “It continues to push the state in an environmental direction that is, quite frankly, irresponsible.”

One main focus for Borgeas is CEQA, the California Environmental Quality Act, that has a lot of requirements which he believes are holding back construction, economic development and a host of other issues.

Of course, the major issue in California, and around the world, is the Covid-19 pandemic.

Borgeas is a member of the Senate Committee on Pandemic Response, which he said is “now in the process of making recommendations” to state officials about the pandemic response so far and what can be improved.

“What are the lessons we have learned from Covid?” said Borgeas.

For one, he said the state’s Employment Development Department, which handles unemployment claims, “is in shambles and did not perform according to the needs of the time. It was not a small failure. It was in shambles and is to this day.”

He was also frustrated “that people have felt there were two options,” when it comes to Covid, and policymakers “looked at them as being fundamentally incompatible.”

Those are public health and economic survival, he said.

“We lobbied the governor very hard that we allow, under certain limited circumstances, to partially reopen,” said Borgeas. “That was a success.”

However, he said “the problem was when it went back into the governor’s hand,” it changed.

That change was when Newsom created a “tiered system” for counties in California.

“It confused businesses,” said Borgeas. “There was a compounding effect.”

He also criticized the communication aspect of the pandemic, saying “it could have been improved.”

Borgeas said he understands during an emergency, the governor and state officials have to take the lead and added that lawmakers should have played a role, but were shut out of the process.

“We didn’t have a read on what the governor and his public health advisors were doing and it was being run by fiat,” said Borgeas. “We had no involvement whatsoever. I don’t think that should ever be repeated again.”

He said there was “no reason for us to lose months and months of legislative time because we couldn’t convene physically.”

Borgeas acknowledged “these were emergency situations” but said “we should have been able to discuss the appropriate business. It troubled me because it was resolvable. I don’t think the legislature should be running emergency response. But we have a vital role and I don’t think it should ever happen again.”

A major issue in California is the business climate and how many perceive it to be negative.

“This goes to a much larger issue,” he said. “There is a faulty presumption amongst legislators and the executive (branch) that businesses, no matter how hard they tried to make it difficult, will always to find a way to survive in California.”

“Frankly, I think the numbers are showing. California has lost significant talent, a significant amount of medium to high end talent, by (businesses) relocating,” he said. “California, even while the fifth largest economy in the world, cannot sustain this. California’s prosperity is not infinite.”

Borgeas said “until there is a realization by the controlling part that the more they push businesses away, the harder it will be to create” more jobs and a better economy.

He pointed directly to AB5, which is the law that required some workers who are independent contractors to become regular employees, costing businesses a lot of expense.

“It was largely a union driven bill,” said Borgeas.

The bill was overturned by voters in the recent election.

He said there were “stark ironies” when it comes to AB5, noting with Covid, many people began working remotely.

He also found it ironic how people “valued that they could get food delivered,” something that was in jeopardy with AB5 until it was overturned.

Borgeas introduced legislation, as did others, he said would help businesses by giving them limited immunity “on the strictest conditions they are abiding by health guidelines.” Two measures were introduced.

He said those would have allowed some businesses to open with health measures in place and not face lawsuits by people who might contract the virus.

“The attorneys and others did not want to see these move forward,” said Borgeas. “It only takes a little imagination to know they were going to find ways to create class-action lawsuits for people who got infected by the virus.”

He called it “self interests of those who are overriding the public need. Our system of government needs to be substantially recalculated. Are we providing the basics? That is what government is for.”

Overall, Borgeas is frustrated with the state’s leaders and thinks changes must be made for the future of the state.

“California needs serious people in leadership looking at pragmatic ways to address our compelling needs,” said Borgeas. “Special interests have dominated Sacramento. As long as that continues, California will not be the Golden State.”