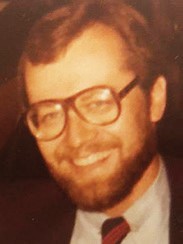 Bill lived a life of romance, purpose, humor and spirituality. He was a Renaissance man who loved music, yoga, politics, golf, Chinese medicine, meditation, and the Chicago Cubs.

In college at Southern Illinois University, he was the co-founder and the first president of the Illinois Public Interest Research Group, an organization founded by Ralph Nader to expose corrupt business practices. He was also a radio announcer, and with his deep collection of vinyl, wit and stage presence, he had a live DJ show, “The Hard Guy,” at Bonaparte’s Retreat.

After completing his degree in journalism, he moved to Springfield, Ill., to work as an “Advance Man” for Governor Dan Walker from 1974-1976. He then moved to Chicago and built a career as a massage therapist and acupuncturist, serving many clients including the Chicago Bears football team. As a lobbyist for the Illinois Acupuncturist Society, he led the successful effort to approve licensure for acupuncturists with the Illinois State Legislature.

Bill was a passionate golfer, golf club collector and graduated from the PGA Professional Golf School in San Diego. He played most of his rounds at Cary Country Club and enjoyed playing with his friend Bob Peele at Butler National and Olympia Fields. He was passionate about the four major PGA tournaments, and he and Bob had a debrief call after each one over the last 40 years.

In 2006, he moved to Bandon, Ore., to work in the golf industry. He became the media liaison for the golf press at the Old MacDonald course at Bandon Dunes and went on to serve in several roles at Bandon Dunes. He was well known and loved by his fellow team members at Bandon. On his days off, he traveled to flea markets and garage sales looking for antique hickory golf clubs and other golf memorabilia.

As his health began to decline, Bill spent his last years in Mariposa to be near his friends, Nancy and Dennis Martin.

He was admired for his keen intelligence and wit and loved for his sense of humor. He will be sorely missed by his friends, Nancy and Dennis Martin, Brandon Peele, Bob and Kathy Peele, Rick Peloquin, Mary Bacaro, Linda Folsom, Marilyn Murphy and many of the staff of the Ewing Wing at John C. Fremont Hospital.