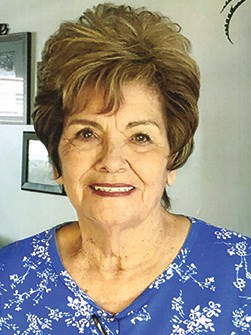 Barbara “Bobbie” Jean Borba Mendez went into eternity with her savior Jesus Christ on Wednesday, April 29, 2020. She was born in Modesto, Calif. on June 2,1937 to Anthony “Tony” Borba and Katherine “Katie” Coleman. She was the oldest of four sisters including Betty May Borba Donohoe, Bernice “Beanie” Ethyl Borba Birge and Bonnie Doreen Borba.

She grew up in many places around California including Mariposa and Yosemite, Cypress, Chino and finally in Paramount, where she raised her family. Bobbie had a flair for working with her hands, and from a young age, started milking cows with her father on a dairy farm in Chino.

Bobbie became a professional seamstress and her first job was making bathing suits, and then she went on to work for over 20 years at Canvas Specialty in Commerce. She continued her passion for sewing by opening Barbara’s Canvas where she designed and manufactured diverse canvas products such as karate mats, boxing rings for MasterBuilt and Golden Boy Productions, a giant curtain for the Space Shuttle, luggage curtains for the Long Beach Airport, canvas products seen in the Pirates of the Caribbean ride at Disneyland, street banners for the City of Paramount and many other heavy material products.

She once designed and made a giant teepee for her hometown Mariposa Chamber of Commerce and even made canvas murals for street artists in the City of Venice. She hardly ever said “no” to a request from family and friends and ended up making countless boat covers, awnings and often working late into the night. She developed many loyal customers around Southern California who loved her custom work and attention to detail. She seemed to never grow tired when sewing and without a doubt, became the “queen” of canvas.

Bobbie was proud of her Portuguese and Miwok Native American heritage, and she enjoyed sharing Native American artifacts with her grandchildren like dream catchers, feathers and turquoise jewelry. She loved attending the annual Portuguese Festa on June 23 in Hopeton, Calif., where she exchanged Borba family stories with her cousins.

Bobbie enjoyed the outdoors and taking walks with family and friends to Whitepoint Beach in San Pedro. She loved growing roses, trout fishing in streams and going for long car rides. She introduced bologna sandwiches to her children and grandchildren. She craved black licorice and Good & Plenty candy. She played and chaperoned her daughters in softball and maintained a strong throwing arm into her 70s. She finished elaborate puzzles in record time. She was a liver transplant recipient from UCLA Health and was among the longest living liver transplant patients. Barbara was kind to everyone, spoke her mind and loved to laugh and make others chuckle as well.

Bobbie is survived by her husband of 61 years, John Eugene Mendez, and four children: Viki Koops, Barbara “Bobbi” Tolentino, Jodi Mendez, and son John Jr. She is also survived by 12 grandchildren and 12 great-grandchildren, along with sons-in-law Kevin and P.J. and daughter-in-law Cori.

A memorial was held Saturday, May 9 at Luyben and Dilday Mortuary followed by interment at Artesia Cemetery at 1 p.m, with Pastor Ken Korver presiding over both. A celebration of life for Bobbie will be held in a few months at Emmanuel Reformed Church in Paramount.

In lieu of flowers, the family encourages you to donate to Donate Life America, at www.classy.org/give/209009/#!/donation/checkout and register as an organ donor at www.donatelife.net/register/

Luyben Dilday Mortuary (www.luybendilday.com) is in charge of the arrangements.