Athletes dealing with lack of games the best they canFree Access 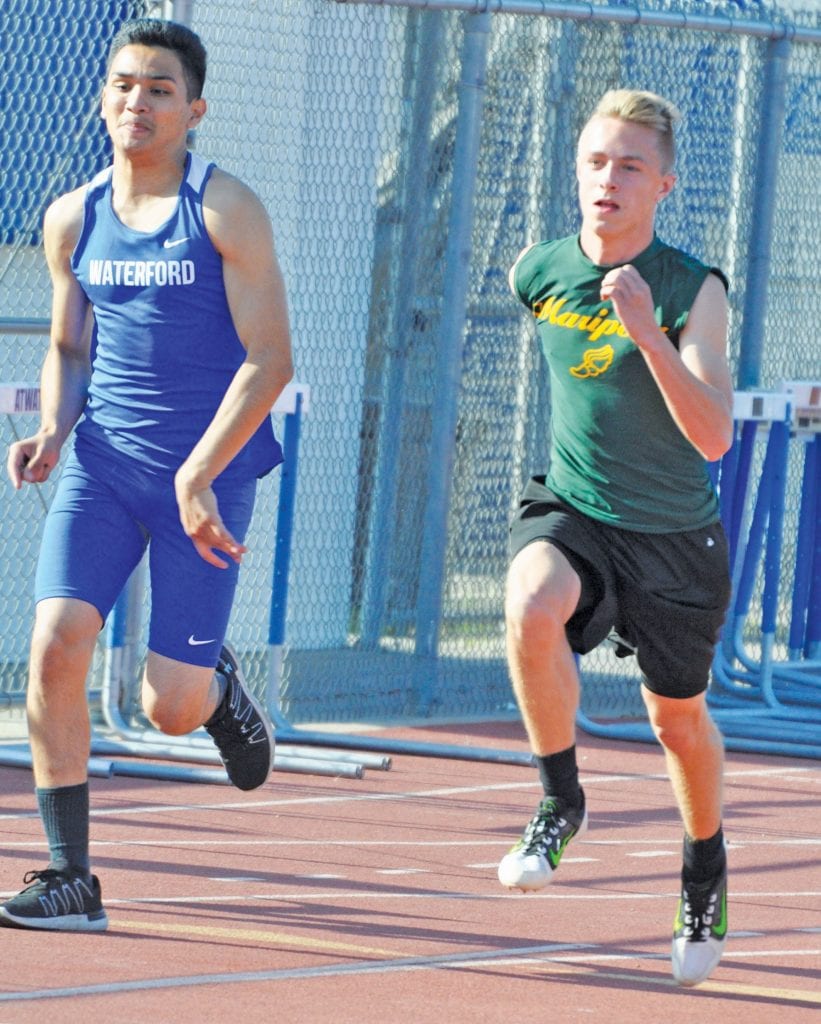 Owen Bissmeyer (right) is one local athlete who is biding his time while play is stopped due to the coronavirus. Photo by Matt Johnson

High school sophomore Wyatt Green — who was the starting varsity quarterback on the football team at Mariposa County High School and is a junior varsity baseball player — probably put it best.

“It’s weird to not be doing anything,” said Green. “Also, all professional sports are delayed and we can’t even watch sports. So it’s a really weird and tough time to be an athlete.”

It certainly is a tough time for athletes, who are by nature competitive people who enjoy getting onto the sporting field and being part of the action.

The coronavirus has shut down all activities in the Mariposa County Unified School District, which means no sporting events are occurring locally.

“It’s something really tough that we just have to persevere with,” said MCHS senior JC Davies. “As an athlete, you see a challenge and have to overcome it. It’s one more obstacle to overcome.”

Davies was a standout football player for MCHS this season, and had been playing baseball this spring — one final sport before he graduated. Asked whether it’s tough being a senior and knowing that his final high school sports season may have been ruined by the virus, Davies stayed positive.

Mariposa’s Jessica Vegely thought her final season of eligibility came to a close at Kansas Wesleyan, but thankfully, was granted another year of eligibility, if she chooses to return. Courtesy photo

“It’s been a little difficult for me, but like I said, it’s just another obstacle,” Davies said.

Green likewise is trying to adjust the best he can.

“It is pretty frustrating and kind of hard to just pause right in the middle of everything, especially with my team right now. We were just starting to play well as a team and perfect all the little things and having to pause and possibly cancel the season is pretty tough,” he said.

Green said he, along with many of his fellow athletes, are still holding early morning workouts and “getting the work in on the field and working out on our own time.”

But he admitted “it’s still hard to not be playing” the sport.

“I’m hoping the season is just postponed and not totally canceled. Some people I know at different schools were saying that all spring sports are done indefinitely and that has to be pretty tough, especially for the seniors that have probably already played their last game of baseball with the same team ever. But in total, for most athletes, it is really weird and pretty hard to not get to play because of everything going on,” he said.

Green’s travel league football team also had to pause its season, which is “probably the toughest part for me,” he said, because this is the time of year for most athletes to get noticed by colleges and be recruited and looked at.

“With the virus going around, all college campuses and camps are closed and all tournaments are canceled so it’s hard to get out there and to be seen and make a name for yourself because offseason is that time to get looked at,” Green said. “When it comes time for normal season they know who to look for. So that’s probably the hardest on me.”

Owen Bissmeyer is a senior track athlete who said he is focused on simply being ready in case the season were to resume.

“It’s disappointing to have my last season be affected by something completely out of our control, but there’s nothing we can do about it. I’m planning to continue conditioning work while practices and meets are canceled, with the hope that we’ll get a few meets in this season yet,” he said.

Jessica Vegely is a 2016 MCHS grad who had been playing college softball at Kansas Wesleyan.

Softball season was officially canceled by her school just days ago.

“When they postponed the season, it gave us hope it wouldn’t be officially canceled. I didn’t think it would actually happen. When it did, we were all in shock and really emotional. It just throws everything for a loop. You don’t know what’s going to happen now,” she said.

Thankfully, the NAIA (National Association of Intercollegiate Athletics) announced no spring sport student athlete will be charged a season of competition, meaning Vegely could come back for another season, if she chooses.

She isn’t sure yet if she will utilize that replacement season of eligibility.

In the meantime, her coursework through the school has been moved online, and without softball, there isn’t much point for her to stay in tiny Salina, Kansas.

Then there is Blake Atkins, a Division I baseball player for UC Berkeley. Atkins graduated from MCHS in 2018.

Atkins and the Bears had their entire season canceled after playing just a few games.

“It is a little frustrating,” said Atkins. “We didn’t start off hot but we were looking to turn our season around. It’s a huge bummer. We’ve been preparing for the season for almost a year.”

Atkins said he is “personally bummed about the season ending” because he “was looking forward to the possibility of me getting an (expanded) opportunity, but I am more bummed about not being able to compete as a team for an entire season.”

He described the situation this way: “The whole situation is still shocking to both the team and I because we have been putting in so many hours to prepare for the season and it seemed like it was taken away out of nowhere. One day we were told that we were going to continue our season without any fans at games, and the next day we were told that the season has been canceled. In a matter of one day, we went from having a full workout and practice to prepare for our road games against Washington State, to returning back home for the rest of the semester. I understand that the decisions were made to better conserve the health of individuals, but it’s still crazy to have it taken away after preparing as a team for so long.”

Atkins did say the NCAA is granting every athlete an extra year of eligibility because of this shortened season. In the meantime, Atkins knows he needs to stay in shape for future seasons.

Because the sports season is canceled, along with in-person classes, Atkins is taking online classes offered by UC Berkeley. He is also trying to stay in shape.

“I’m still working out,” he said. “I am also continuing to work out and practice to get ready for summer ball and next season.”

It hasn’t been an easy spring for athletes, but in the meantime, all they can do is wait for games to resume, or for next season to roll around.