Arlington West and how I procrastinate with columnsFree Access 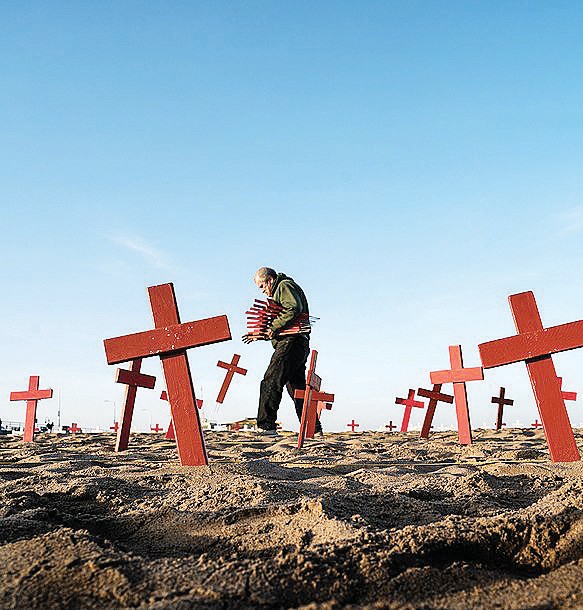 This is Arlington West, a “cemetery” which has been part of Santa Monica, the author’s hometown, for many years. Photo courtesy Lorie Shaull

You’ll be reading this in June, but I’m writing it at the end of May, in the middle of Memorial Day weekend, that weird time of year when honoring the war dead bumps up against blow-out mattress sales.

It’s my honor to be given space to say what I want to, once a month, in this — the oldest continuously published weekly newspaper in California (I love that). I’m talking about writing this personal column as compared with writing stories about other people, which is also an honor but in a different way.

It really is a privilege to have a platform of any sort, so you’d think I would be prepared with a ready column on the day my extremely reasonable editor asks for it. Sadly, this is not the case.

Rather, as a professional writer, I employ the art of resistance and act like I don’t know how a calendar works when it comes to this golden opportunity to say my peace. Yes, I know it’s supposed to be “piece” but, I’m doing a thing here, so just wait. 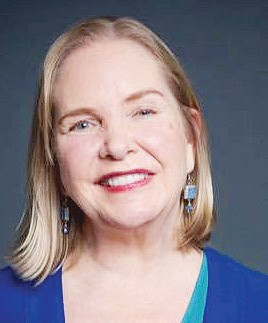 When writing this column, I’m trying to be both entertaining and a little bit revealing, mostly because Brene Brown says vulnerability is the key to compassion and I’m not great at it. Vulnerability, that is. So I try and say something true or something helpful but, sometimes, I get stuck and can’t think of what to say.

And that’s how it is on this Sunday before Memorial Day. I’m thinking about the beach, but not as you might imagine.

In Santa Monica, where I was born, a temporary “cemetery” appears — at the beach — on Sundays, as thousands of white crosses are methodically positioned in the sand just north of the world-famous Santa Monica Pier.

From sunrise to sunset every Sunday since Feb. 15, 2004, the installation known as “Arlington West” has been built, deconstructed and rebuilt weekly and on Independence Day as “a way to acknowledge the costs and consequences” of war, according to the nonprofit Veterans for Peace who are in charge of the project.

Named in honor of the national cemetery in Washington, D.C., Arlington West refers to a series of exhibits in coastal California from San Diego to Santa Barbara, intended to draw public attention to military and civilian deaths during the invasion and occupation of Iraq in the early 21st century. Santa Monica is the only one of five still active every week.

When I lived there, we commonly visited Arlington West in Santa Monica on Memorial Day Sunday, and other Sundays, usually riding our bikes down the concrete path along the water leading to the pier. The sight of the sea of crosses in sand was always sobering, heartbreaking.

As the conflicts continued over the years, thousands of small white crosses alone were insufficient to represent the killed in action, and red crosses were added to account for 10 deaths each. Those who were newly dead in any week were honored by “coffins” draped with flags, one for each. Grieving families would often mark a cross or sometimes a Star of David for their loved one, leaving notes, mementos and belongings behind only to be wrapped and unwrapped every week by veterans and other volunteers.

Among the lessons Arlington West offered were insights into facets of the war in Iraq and Afghanistan that, otherwise, I may not have experienced. Veterans for Peace shared information on military deaths, female deaths, military sexual trauma, the redeployment of traumatized troops, friendly fire deaths, the more than half a million wounded and, finally, the horrific number of military suicides during those wars and continuing today.

The suicides are nearly unfathomable.

For instance, in 2012 alone, an estimated 7,500 former military personnel died by suicide. More active duty service members, 177, died from suicide that year than were killed in combat, 176. The Army suffered 52 percent of the suicides from all branches.

In 2013, the United States Department of Veterans Affairs released a study that covered suicides from 1999 to 2010, which showed that roughly 22 veterans were dying by suicide every day, or one every 65 minutes.

So this is what I’ve been thinking about in the days leading up to this weekend, before Memorial Day on Monday when four cemeteries in Eastern Madera County, where I live now, will hold services.

But I don’t want to burden readers with this talk of military suicides, I’m admittedly no expert and it’s a beautiful weekend to be alive. It’s just one of those things that once you know, you know, and it’s hard to forget. And we shouldn’t. Still, I’m reluctant to parse it out on this page.

A little research reveals what is markedly better in the bad news: the most recent military statistics show that veteran suicides have dropped from a high of 22 individuals dead each day to “just” 18 suicides daily. They haven’t accounted precisely for what may have occurred during the pandemic, but early indicators show the rate remained mostly the same in the last year.

That’s progress made after years of campaigning from military and mental health advocates. Still, about 18 service veterans kill themselves every day, significantly more than civilians, and that doesn’t count the “accidental deaths” from drug and alcohol addiction or highrisk behavior.

I try to think of something else to write, like good things that have happened during the pandemic. Soon I’m carrying dirty laundry down the hallway and attempting to swallow an allergy capsule at the same time, but I drop the capsule. It’s a clear capsule and dark in the hallway, so I get a flashlight to find it on the carpet. That’s when I notice that the space between the carpet and the wall is really filthy, and I need to get out that little vacuum with the attachment that can get in there and — see what’s happening? I’m still not writing.

I need something uplifting, something amusing. Wondering what’s wrong with me, I scroll through the news and find a clue: I’m languishing, according to one article. We survived the pandemic and — now what? We languish.

One of my writerly tricks is to visit NationalDayCalendar.com for positive inspiration, so I do that. At this point, I’ve already missed the opportunity to talk about Memorial Day with any credibility, so let’s move into June, I think, and see what’s happening. Maybe for once I can get ahead.

Scrolling again, all the way to June 27 and — boom — what do I see? National PTSD Awareness Day, endorsed by the U.S. Department of Defense and the American Red Cross, among others. June is PTSD Awareness Month.

I take it as a clear sign, put the vacuum away, and get to work.

“Post-traumatic stress disorder is a mental health disorder that some people develop after experiencing or witnessing a life-threatening event,” according to the Red Cross.

Since service members are among the most vulnerable populations when it comes to stress-related illnesses, the American Red Cross emphasizes that the importance of military members seeking help to cope with everyday stressors or take control of their mental health before, during and after deployment.

“Many people across the globe suffer silently with PTSD (post-traumatic stress disorder),” the Red Cross says, citing PTSD Awareness Day on June 27 as “a great opportunity to talk with family and friends and learn more about this disorder and how it affects those around us, particularly our service members.”

Contemporary research is finding that first responders in all categories are vulnerable to the effects of PTSD, as well as military personnel. An effort is underway to remove the stigma from seeking assistance to balance mental health.

“Asking for help is very hard because some people don’t want others to know that they are getting treatment or going to a program to solve their mental and emotional issues,” says Red Cross specialist Jaime Cruz.

For Cruz, a former service member, “It was very frustrating to have anxiety, sleeping problems and depression and not know what to do about it. I used to scream in the middle of the night without remembering anything the next morning. I also used to yell at my wife for everything,” said Cruz, who finally sought help. Being able to express his own feelings was crucial in his recovery, he said.

If you or someone you know suffers from PTSD, one of the places to contact is the Red Cross at (877) 272-7337 or visit redcross.org. And if just one person who reads this is able to pass on that number to another person who needs it, that will be enough for this column for this month.

And in July, we can look forward to talking about National Eat Your Beans Day.

Kellie Flanagan is a staff writer for the Mariposa Gazette focusing on Eastern Madera County and can be reached at kbriley07@sti.net.