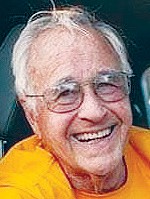 Alan Glenn Haigh was born on Jan. 1, 1931 and died peacefully on May 9, 2019 at the age of 88 in his home on the Haigh Ranch in Coulterville, Calif. He lived a full and adventuresome life as a fourth generation cattle rancher, Sonora police officer, Mariposa County Sheriff’s Posse member and Greyhound bus driver. He became a private pilot at the age of 16, and proceeded to terrify his unsuspecting classmates with his flair for showing off his skills.

Second only to flying was his love of horse packing in the high Sierra. He helped his father bring supplies for building the snow survey cabins, and later packed supplies for camps in Yosemite National Park. He continued making yearly horse pack trips with friends and family.

Alan joined the Independent Order of Odd Fellows as a young man and was a member of the Coulterville Lodge 104. In addition, he was a member of The Matuca Chapter of E.C.V., a life member of the Northern Mariposa County History Center and a director of the Mariposa Pioneer Wagon Train for many years.

His membership in the Stockton Corral of Westerners, an organization that focuses on California History, fueled his passion for historical research, an activity that continued until the day of his passing.

In lieu of flowers, donations in Alan’s name can be sent to the Northern Mariposa History Center, the Humane Society of Tuolumne County or a charity of your choice.