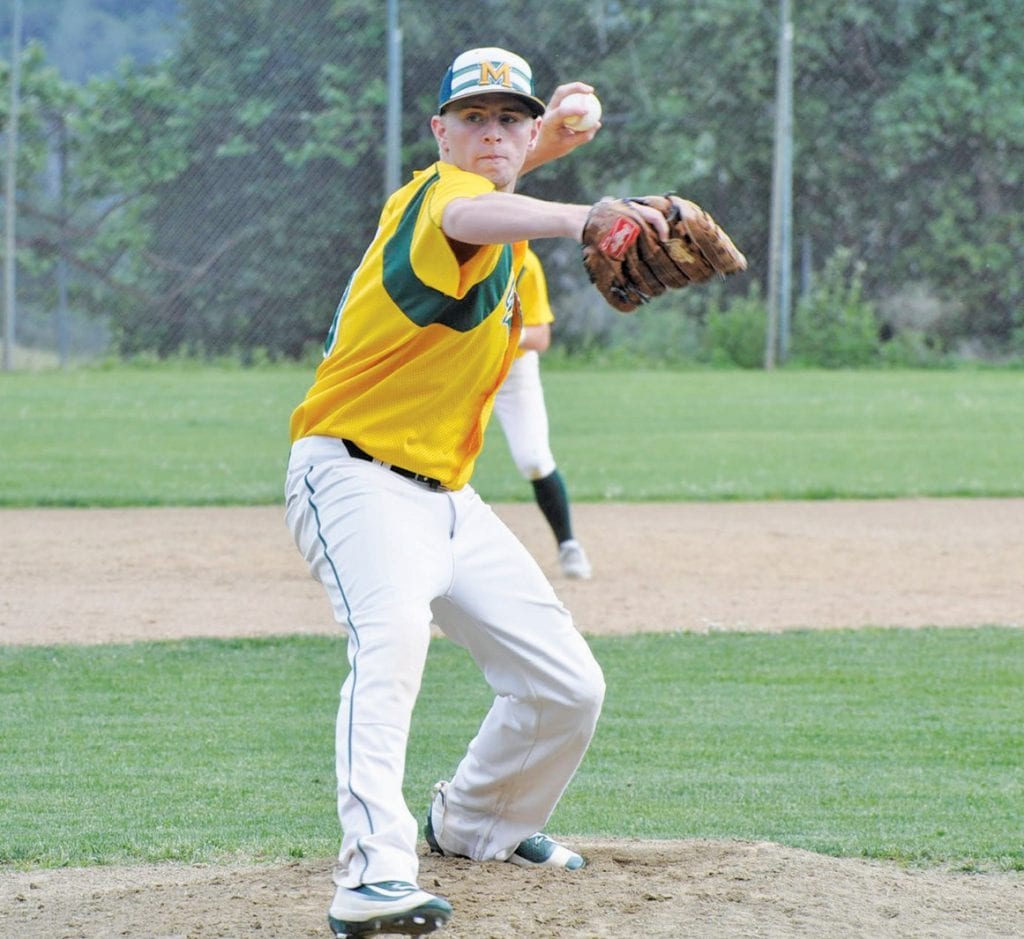 MCHS 2016 graduate Morgan Hughes made the All-Decade baseball team due to his clutch pitching. Hughes played hurt in the section final game in 2016 but delivered in a big moment to help the team out of a jam. Photo by Matt Johnson

With the start of a new decade, the Gazette staff wanted to honor the athletes from Mariposa County High School who participated over the decade of 2010-20. Coaches from each sport have been contacted and have been providing their picks, along with input from the Gazette staff, of who the athletes of the decade are. The goal is to highlight each sport, and stories have been spread out over the weeks since January. 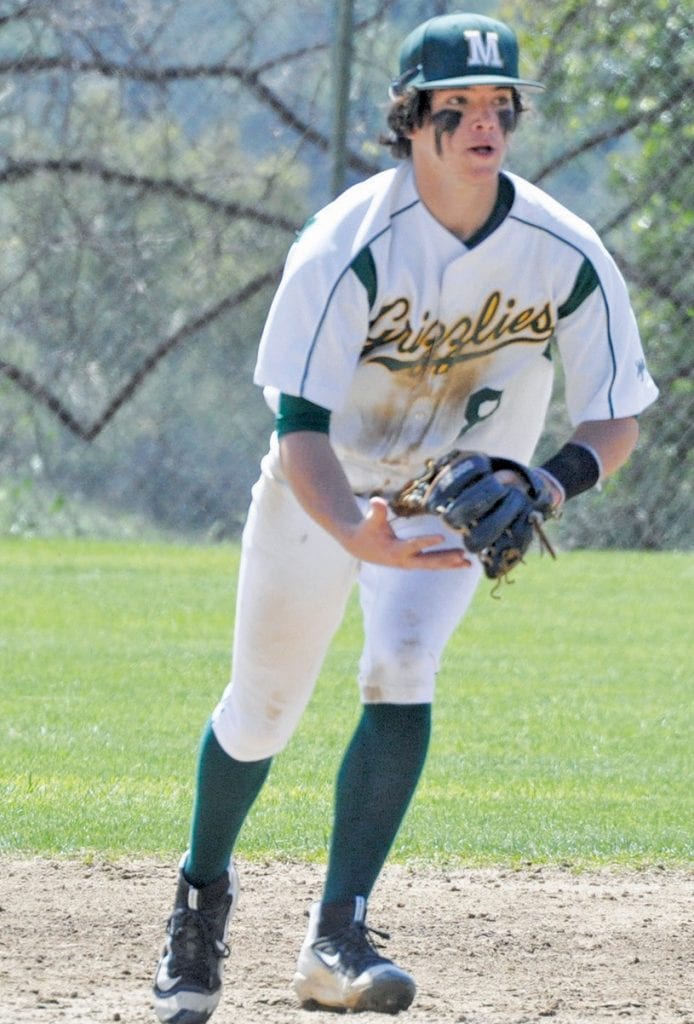 Mariposa 2018 graduate Joey Freitas went on to play at the college level, and was one of the top pitchers and all-around players in the Southern League during his time in high school. Photo by Matt Johnson

The Mariposa County High School varsity baseball program has been one of the school’s most successful sports programs over the last decade.

MCHS baseball won its last section title in 2016, and very nearly won another in 2019. It seems every year, the team posts a strong record and is competing deep into the postseason.

A lot of strong baseball players have come through the program, which makes it difficult to select an All-Decade team.

But that was what coaches Justin Kleinsmith and Bruce Vegely put their heads together to do recently. Kleinsmith has presided over the baseball program as head coach since 2015 and began assisting with the program in 2010. Vegely coached through the 2014 season and really, anyone with the last name of Vegely is coaching royalty in Mariposa.

The key for both Vegely and Kleinsmith was trying not to leave anyone out. There were a lot of names to ponder and roster sheets to comb through.

“Just remembering everybody’s contributions was important. Some guys stick out defensively, some guys can hit the heck out of the ball. They all have something they bring to the table. You don’t want to leave any of it out,” said Kleinsmith.

Many of the players from the All-Decade team were All-League and area standouts. Several went on to play in the college ranks. One of them, Blake Atkins, is even playing Division I baseball at UC Berkeley.

Because there are not statistics readily available for each season and player, those were not included. The team also took a very loose, free-form. Obviously, there were more players from 2010-20 than would fit onto a normal baseball team, so this roster is larger than normal in order to honor more of the players.

Here is the official team:

As any local baseball fans can see who are familiar with the program, it’s one mega-talented team.

“That is a hell of a decade team,” Kleinsmith said.

Kleinsmith and Vegely then provided individual details about each player:

Tristan Mero — He could play anywhere. He was probably our best outfielder as well but never played there. He was our catcher.

Blake Atkins — He knows the game. He’s another guy you could put anywhere on the field just because of his knowledge and love for the game.

Jarrett Leonard — He was a left hander who could hit. I remember he came up as a sophomore and drove in some clutch runs in the section game.

Bodie Vegely — He’s been around the game for a long time. He’s a kid you can see where it’s been part of his life. He’s wanted to continue in the sport. He could hit the crap out of the ball and was a great first baseman.

Josh Mah — If there was a Golden Glove Award, he would have gotten it. He was definitely sure-handed on defense. He was a three-year starter.

Chris Koutsoubos — He was always trying to improve. That shows his work ethic, and how he got to where he ended up. You knew what you were going to get from him. He was solid.

Joey Freitas — He was passionate and talented. He had a rocket arm and was versatile. He threw hard.

Sam Tucker — You couldn’t rattle him. He was consistent.

He had a lot of talent. He could be put anywhere on the field and didn’t get rattled.

Jake Williams — He definitely grew up with a baseball background. He’s another solid all-around player. You trust him anywhere.

Jarrett Miller — He is a hitter and another kid that is passionate about the game. He loved baseball.

Leo Kari — He’s another kid with a good arm who pitched in some big games.

Ian Merzwinski — Him and Logan Donati would be similar. They run down balls. I’ve never seen kids run across the outfield like that.

Derek Nady — He pitched a little also but he was in the lineup because he could hit the ball hard. He knew how to get on base. He was a “steady Eddie.” We used him all over.

Aaron Lerma ­— His slider was ridiculously good. He was another great arm.

Noah Fluharty — He’s a baseball fanatic. It was a pleasure coaching him. You could tell he wanted to improve, just by looking at him.

Jacob Johnson — Didn’t have much time with him, but I remember coach Vegely describing him as a rubber arm. He could throw forever.

Morgan Hughes — He worked really hard to improve. He was always trying to adjust to situational moments.

Cody Stitt — He threw hard as well. He had some really clutch games on the mound. He dialed it in his senior year.

Austin Garibay — He just put balls into the universe. He would hit them to the moon, man. That kid was a big, muscular hitting machine. He was a pure hitter.

Michael Medinas — Played four years of varsity baseball. I don’t know there are too many of them on this squad, if any. He was a strong hitter and great hitter.

Ryland Radanovich — He was on the first team Kleinsmith coached on junior varsity, with Josh Collins. We saw that he would help the team out. We asked him to be a leader. He was a team leader. He set the tone when it came to work ethic. He wanted to get better.

Chaz Fane — Before he came here, he hurt his throwing arm, so he trained himself to be ambidextrous and throw left-handed. It was wild at times but was impressive. He was a welcome addition to the team.

Kevin Foraker — He was a stud behind the dish, catching. He was a wall. He knew the ins and outs of catching.

Robbie Stark — He’s a kid that played a lot of travel ball. You could tell he has been around the game and could probably be used anywhere on the field.

Emmet Preston — I feel like Emmet was our dark horse, in the shadows. He was like a silent assassin, like Logan Donati. They’re sneaky guys that would help you out in the lineup when you need it. Not super vocal, that’s how Emmet was.

Brandon Knauf — He had speed like Logan Donati and could run like a deer. Another speedy guy. He was quiet. His actions spoke louder than his words.

Nick Brocchini — He could play anywhere. He was a good infielder but could also keep hitters off balance as a pitcher.

Josh Collins — He’s another guy that was a leader. He would do whatever it took to succeed and had that mentality.

Tommy Stickles — He was a hard-nosed workaholic second baseman, and a kid with a “get the job done” type of mentality. He worked to get better every day.

Collin Ritter — He was a late bloomer who exploded into a great player. He had tons of clutch hits. He was our dark horse.