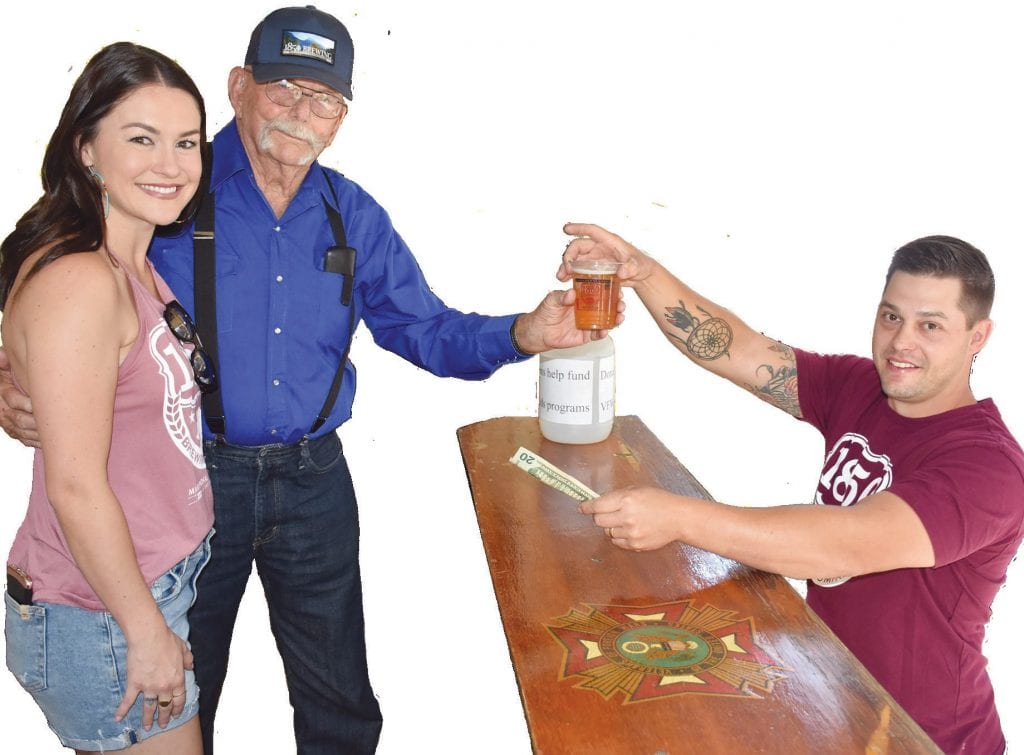 Neither Jake or Hannah Wackerman could hold back their emotions.

It was about 20 minutes before the opening of the Mariposa County Fair last Friday morning. Jake and Hannah were in the beer garden area of the fairgrounds. And so was Fred Wackerman, Jake’s grandfather and a well-known resident of Mariposa County.

Now it might not seem unusual that Fred was in the beer garden. He’s been there for more than 50 years pouring lager for the visitors to the fair. Year after year, fair visitors have purchased a glass of beer and chatted with Fred.

For Jake, it was the culmination of a dream — one he shared with his future wife Hannah so many years ago while attending the Mariposa County Fair. They were on a date.

“I had just got my first brewing kit,” said Jake. “I told Hannah that one day, wouldn’t it be great if I could supply the beer for the fair.”

Incredibly, he told her that while they were in the beer garden.

“I told him he was crazy,” said Hannah. “I still tell him he’s crazy!”

It was about five years ago when Jake began taking brewing more seriously. It was two years ago when 1850 Brewing became a business. Since then, they have sold a lot of their homemade brews at 1850 Restaurant in Mariposa.

But they only had enough equipment to supply the restaurant — not the fairgrounds.

“We could not have done it before this year,” said Jake.

The reason is they had to purchase a lot of new equipment in order to supply enough beer for the fairgrounds. In all, they brewed 42 kegs for the weekend event and for the first time ever, Jake made a lager.

“It is really tedious to make,” said Jake.

But make it they did with the equipment now housed in a warehouse so they can do a lot more production.

With all of that, however, selling beer didn’t seem to be as much on their mind as having Fred at the fairgrounds.

Both were wiping back tears as Fred, who has been through 13 heart procedures and has to use a walker, stood by being his jovial, if not reserved, self. He was visiting with family members and taking it all in.

The plan was for Fred to draw the first beer of the 2019 Mariposa County Fair. And he did just that.

The next part of the plan was for Jake to buy that first beer from his grandpa.

Though Jake paid the normal price, it was clearly evident the emotions were sky high behind, and in front of, the counter at the fairgrounds.

Though Jake admitted to being a little nervous, he also said he was “excited” to be able to offer this service for the people visiting the fair.

In fact, they both are proud of the fact that some of the proceeds from the beer sales go to the local Veterans of Foreign Wars organization, of which Fred has been a member for decades. He is a veteran of World War II.

“To be invested here and to give back to the VFW, that means a lot,” said Hannah.

Jake said it is “all of the people of the county” who have helped them have a successful business and be able to invest and expand like they did this past weekend at the fair.

For Fred, it was just another day at the beer garden.

Fred is a man of few words, but it is obvious he is proud of Jake and Hannah as well as his whole family.

When asked how he felt about being able to serve up the first beer to his grandson, he simply said, “Very good.”